We collected a bit of information about travel to and from JSDayIE, how to get around Dublin, and where to stay.

Dublin International Airport is approximately 6 miles / 12 kilometres north of Dublin city centre, near a large suburban area called Swords. When you arrive at Dublin airport, there are four main ways you can get to the city centre.

Airlink is an express coach service operated by Dublin Bus, which also runs the city's public bus service. The Airlink is an express service (fewer stops) that goes from the airport to Dublin's main bus station Busaras, then to O'Connell Street in the city centre and finally to Heuston, one of Dublin's main train stations. 747 buses are frequent, departing every 15 or 20 minutes, from 5am to 11.30pm (11.20pm Sundays). The Airlink costs €6 one-way for adults, €11 return. See the official website for price details.

Unlike the regular Dublin Bus service, you do not need to have the exact coins / notes on the Airlink. If you give the driver a €10 or €20 note, she will give you change. The listed journey time for Airlink to go from the airport to O'Connell Street is 40 minutes, although it sometimes takes less. The Airlink is not always faster than the regular bus but it has a big advantage during high traffic periods it goes via Dublin Port Tunnel. This underground tunnel links the edge of the city centre with the motorway close to the airport. Even if traffic is busy above ground, vehicles usually zip through the tunnel. 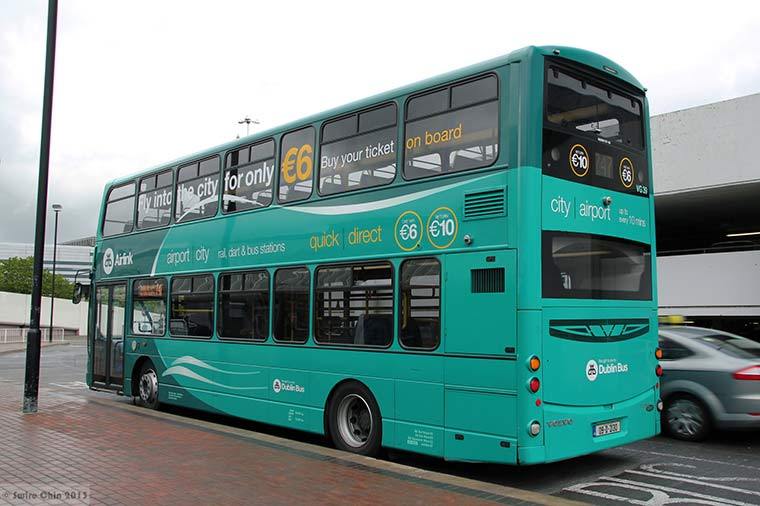 Aircoach is a privately-operated, 24-hour coach service that takes passengers from the airport to the city centre, and other parts of the south Dublin suburbs, as well as other Irish cities. The Aircoach that goes through Dublin city centre is number 700. The Aircoach departs every 15 minutes between 3.15am and 11.55pm. It departs every 30 minutes after that, until 3.15am. See the official site.

The Aircoach stops just outside the exit to Terminal 1, Arrivals level (above Departures). Look for the bus stop on the left as you exit Arrivals. It also departs from just outside the main door of Terminal 2 Departures level. The official journey time for the Aircoach to the city centre is 25 minutes. This can increase to up to 45 minutes with heavy traffic. The Aircoach does not go through the Port Tunnel, but it does not make many stops, and it uses the bus lanes and the motorway.

The adult fare from the airport to Dublin city centre (O'Connell Street) with the Aircoach is €7. A return ticket is €12. Exact cash is not required -- the driver will give you change if you need it. You can also purchase slightly cheaper tickets online in advance, on the official site. 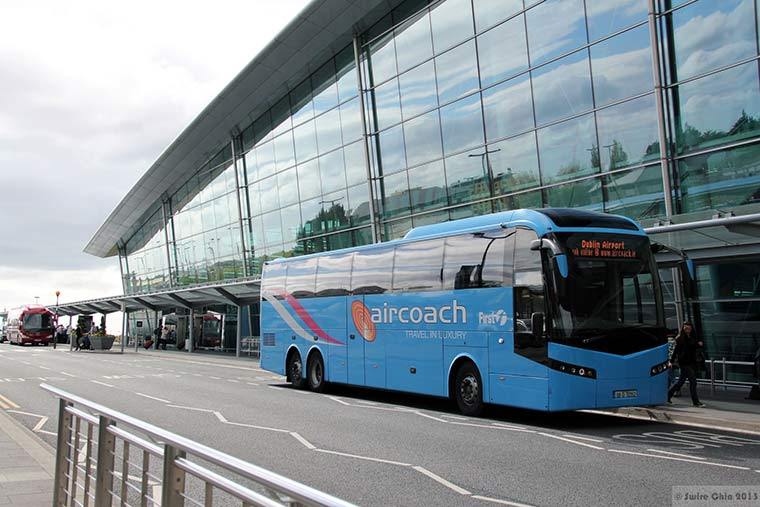 The main users of the public bus service (known as Dublin Bus) which via the airport to the city centre are commuters from the Swords area and airport workers. Many tourists are unaware that they can take the Dublin bus, which is the cheapest option, or else they prefer to take an express coaches, which is a little quicker. The Dublin Buses are easy to recognise as they come into the airport -- they are double-decker (two-tiered) buses, like the one shown below. They are yellow with blue strips along on the bottom, although sometimes Dublin Buses are used to display advertising, usually on the rear.

The regular public bus service is the cheapest option for getting into the city centre. A single fare from Dublin Airport to the City Centre, at the time of writing, costs €3.30. See the official site. You can pay the driver when you get on the bus but you must have the exact coins. Even if you hand the driver a €20 euro note, he won't be able to give you any change back. Another payment option you can consider is to buy a LEAP visitor card -- although if you purchase the LEAP visitor card, you may want to travel on Airlink -- the public express bus, since the LEAP visitor card gives you unlimited travel on the public network in Dublin for 3 days.

The Dublin Bus journey time from the airport is about 40 minutes. On busier times (the morning and afternoon commuter rush) it can take up to 1 hour. Although it takes a similar route into the city centre as the Aircoach, one of the private express service, the 41 bus makes more stops along the route. While it uses the bus lane, it doesn't use the motorway. After 6.30pm, traffic lightens considerably and the 41 bus may get from the airport to the city centre in 30 minutes or less. 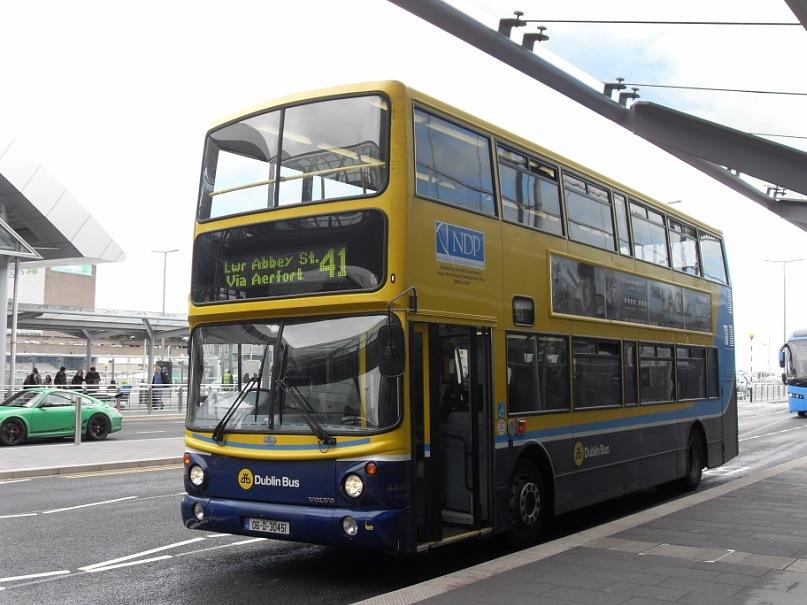 It's easy to take a taxi from Dublin airport. The taxi rank is just outside Terminal 1 Arrivals level. Look to the right as you exit Arrivals. As with most airports, if the rank is busy, you get in the queue and wait for the next available taxi. The taxi fare will be around €25 to €30, depending on time/distance. Extras depend mainly on whether you booked the journey, whether it is peak time, and the number of passengers. The taxi will be metered. More information about regulated Irish taxi fares and extras. Most taxis can take a maximum of four passengers. If you have four passengers, it can be a cost-effective way to get to the city centre, especially if you have to go to a specific location, and you have luggage. You are not required to tip the taxi driver, but it's nice to. Personally, I always tip around €1.

Taxis in Dublin are affordable and everywhere. You can usually hail one on the street, or use apps like MyTaxi app, which also supports app payments. 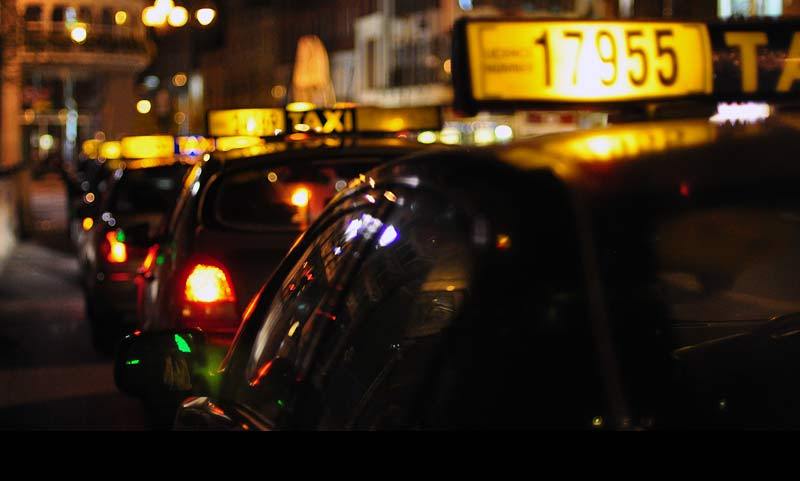 The Leap Visitor Card is a pre-paid ticket that allows you unlimited city travel for 72 hours (3 days) after first use on:

You can buy a Leap Visitor Card for only €19.50 at the SPAR shop (a small grocery shop) in the arrivals hall in Terminal 1 or Terminal 2, or at the Travel Information desk in Terminal 1.

Note: the Leap Visitor Card is different to the standard Leap Card used by Dublin's daily commuters. A standard Leap card costs €5 and a pre-paid balance (e.g. €50) must then be loaded onto it. Do not buy a Leap Card anywhere except in the airport -- only the airport sells the Leap visitor card.

Berlin has many public transport options. We recommend getting one of the tourist tickets for the length of your stay – this will allow you to use all trains, trams and buses in all of Dublin, plus it comes with discounts for popular sights, museums, and other attractions.

You can get to the venue via multiple transport options:

You can find a list of recommended hotels in Dublin here. If neither of those fit your needs, private accommodation options like AirBnB are great, too.

The venue address is: The Round Room at the Mansion House, Dawson Street, Dublin 2